Strong laser beams are used for more than just lighting matches and popping balloons today. There are loads of different real-world applications that utilize a bright beam of laser light to accomplish a specific goal. From search and rescue, construction, drilling, mining, and more; the variety of ways in which lasers are being used today is on the rise. There has also been an increase in both homeowners and airports of all sizes using powerful green lasers as pest-control devices, notably for flocks of birds like geese. 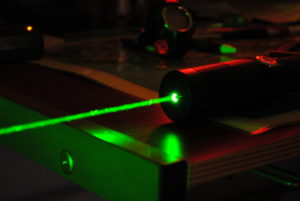 Really any laser color can be used but the difference is that green laser light at 532nm is the brightest color to the human eye and green lasers are 5-10x brighter than any other laser color. So, a 100mW green is much brighter than a 100mW of blue, red, or purple laser light. Also, because this sort of bird repellent is being done during the daytime, you will need the brightest color possible or there won’t be a great effect on the flock.

Why Do The Birds Flee?

When you shine a bright laser beam at a flock of geese, it only takes one of them getting spooked to signal the entire flock to flee. This means that you don’t have to cover the entire group of birds, you can target a few individuals (preferably the ones who are not eating and who are on lookout duty while the others eat). The birds will be shocked by a bright beam of laser light hitting them that they do not understand so their instinct is to flee. It is also a non-lethal and harmless way to do this. Far more humane than going to your backyard with a BB gun.

Who Is This Sort Of Application Suited For?

Airports as small as a local single-engine airport all the way to large international airports like JFK International here in New York have taken advantage of the high-power lasers on offer today. With the risk to aircraft even increasing due to increased flights and an increased number of birds, a solution that many aviation companies and airports are finding suitable is scaring them off with high-power lasers. This allows them to not quell a population of animals with deadly force.

Homeowners as well make up a huge part of laser use for pest control. Too often have lawns and properties been soiled by the excrement of even just a few geese. This means if you’re tired of seeing goose feces and tired of stepping on it, then a powerful laser beam is just the thing you should be looking for to solve the problem humanely.

For the Best High Power Lasers, look no further than right here at Biglasers.com. The #1 Trusted Laser Source Since 2005. Call today with questions you may have and to discuss the options open to you. 1-877-256-6513