With all of the stories making national and international headlines over the past few weeks regarding hikers and campers getting lost for days at a time in the woods, there is no better time than now to discuss the life saving applications that high power lasers bring to the table. Often used by military units in training and real world exercises, as well as fire rescue teams, having the ability to aim a beam of light that is visible for great distances at night is an incredibly valuable tool to utilize. Here we’ll look at what sort of beam colors you should be going with as well as what sort of output powers, not to mention size and portability. 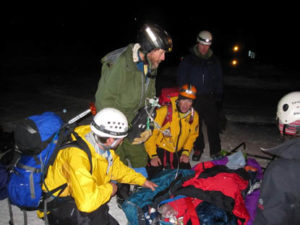 The most important thing, yes even greater than the nanometer beam wavelength will be the strength of the laser. You can have a green laser pointer utilizing 532nm (the brightest color to the human eye in the visible light spectrum), but if its less than 5mW, you won’t get the visible range that you will with higher power units. Now, a 5mW green laser can be seen for 1-3 miles at night on a clear line of site, but its more difficult when you don’t know where you’re looking or aiming. Using something that is 100mW or higher will be far more effective in terms of visible range and won’t necessarily require someone aiming directly at a search and rescue team to be spotted. Even aiming towards a hill top or mountain top and spanning the horizons in 360 degrees sends out a wide range of signal that would be more suitable in a life saving rescue application.

So, as mentioned above, green at 532nm will be the brightest color to the human eye and at the same output powers therefore the greatest for this sort of application. But that is not to say that blue, red, or purple lasers cannot be used. Any laser that is high enough in power to have the beam visible at night will be beneficial over long distances. Being able to signal a search team, a rescue helicopter, hot air balloon, or other fire rescue team can be the difference between life and death in this sort of extreme circumstance. Be sure to focus on power over color, but as a rule green will be the best suited.

Some of the very high power burning lasers out there can be rather bulky and large making them not necessarily ideal for a hiking or camping trip. Not to mention they will use the batteries energy faster than a 100mW unit would in comparison. Be sure to check specifications of size dimensions when considering any different laser variety. As a general rule, look for something that can be used in a single hand, that will fit into your pocket, or includes a belt loop holster and can be worn on your waist or simply put in your hiking pack. Powerful lasers are not heavy items these days and a 100mW unit can weigh as little as a few ounces.

Being safe while enjoying the outdoors is incredibly important. Not only to teach your children and any younger hikers, but also for the safety of yourself and your group. It’s easier than many people may think to get off of the trail path and not find your way back. Think if the woman in Hawaii who was rescued relatively uninjured after 17 days in the wilderness had a 100mW green laser. She would have been able to send her location up from the forest floor to the peaks, to the drones, and helicopters that she could literally see going overhead. Luckily she was found and is alive and well, but this sort of scenario doesn’t always end up with a happy ending.

Be sure to take all different precautions whenever heading into the woods to hike, especially when alone and out of cell service range. A High Power Laser Pointer can be a great life saving tool to add at no weight and relatively low cost to your hiking gear. Call today and get help in choosing the right unit for you today: 877-256-6513