What Was Your First Laser Pointer?

Laser pointer technology has come a long way over the past few decades. So, an interesting question is what was the first laser pointer you ever had? For many of us, simple low power red laser keychains were the norm. Purchased regularly at flea markets or from street vendors, they had caps that could be added to the laser to do visual designs like the silhouette of a woman, grid effect, a dog shape, and others. The function was in that it was a laser beam and a dot that could travel short distances and be really visible at night. You couldn’t see the beam unless in fog or smoke but it was still great fun and a start into the world of lasers for most of us. 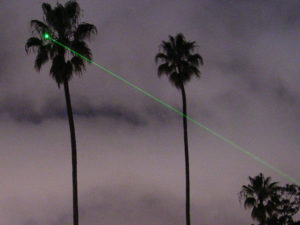 Never had a laser pointer before? Well, now you’ll be more hard pressed to find a cheap key chain laser than you would to find a powerful burning laser today. Technology has come a long way in the past few decades and that means strong laser beams available to a larger audience and also in a wide range of output powers and colors. For example, now the most commonly used laser beam color is green at 532nm. It’s the brightest color to the human eye and is therefore why it appears more powerful when comparing it to other laser colors at the same mW power.

Green lasers are literally 7x-10x brighter than any other laser beam color at the same power. So a 100mW green laser will go about 10 miles on a clear line of site, the same as a 1000mW blue laser at 405nm. So be careful when aiming these powerful beams at the sky as they can go incredibly far. This is great for function though in other ways. Now used commonly for military exercises and also search and rescue. a strong laser is becoming a staple in many campers gear so that they can be seen over large distances should they get lost or need assistance.

So, what should you be considering for your first laser pointer to buy? Knowing what to look for will depend on a few things. What is the main reason or application you’ll be using the laser for? For astronomy and star gazing? For camping security? For burning experiments like lighting matches and popping balloons? Or for veritable research in a specific field? Photography of some kind? Or just for fun, whatever your reason for wanting a laser pointer, you have more options today than ever before. So be sure to do some research and ask questions if you have them. For the Best Laser Pointer To Buy Online, look no further than right here at BigLasers.com, your number one trusted source for all things laser technology since 2005. 1-877-256-6513