Who Invented The Laser?

This is an interesting question that often goes unanswered. With the advancement of laser technology across the globe through aerospace, satellite, military technology to every day lasers like DVD players and even high power hand held lasers; it’s an important scientific question we can consider. The term “LASER“, is a scientific acronym that stands for “Light Amplification by Stimulated Emission of Light Radiation“, we commonly refer to them as lasers. 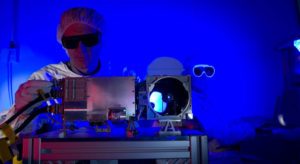 It is different from other types of light because it emits spacial, temporal, or coherent light. Different machines like laser pointers, laser cutters, tools that determine distance, speed, and targeting, and other arrays of technology, use a different form of laser. The most common that we see in our every day lives are hand held lasers which use spacial coherence. In 1960 lasers were invented after years of researchers and scientists theoretical work by Theodore H. Maiman from Research Laboratories.

In terms of the light, the wavelength is what determines the lights distance from short ultraviolet, to visible which falls from roughly 400nm- 800nm, infrared above 800nm to over 4000nm. Blue laser pointers are typically 450nm and green laser pointers are 532nm and also the brightest colors that we can see with the human eye within the visible light spectrum which contains all colors that exist. The color of the laser has no effect on the heat output so high power burning lasers can be in any of the visible colors or the invisible IR and UV wavelengths.

The original name of the laser was “optical maser” when in 1958 Charles Hard Townes and Arthur Leonard (Bell Labs) filed a patent application. They had focused on infrared radiation but instead switched their focus to visible light. A graduate student at Columbia University named Gordon Gould was at the same time writing his doctoral thesis and when Townes and Gould met they discussed emitted radiation. In 1958, Gould published the paper “The Laser, Light Amplification by Stimulated Emission of Radiation” and the term Laser was born. 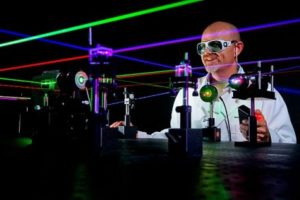 Since then, lasers have come to be a part of everyday life. From optical drives and computer systems, to communications networks, and even visual displays for stadiums and performances. This is a very short list and you may be surprised to learn that some of the items we use each and every day benefit from laser technology or may not even exist had the laser never been developed.

Unfortunately for Gould, the US patent office denied his application in 1959 and the following year awarded it to Bell Labs. So there is some contention on that point as both Bell Labs and Gould had been working on the laser simultaneously, Bell Labs simply filing the patent application in 1958 and Gould in 1959. This lead to a 28 year long legal battle. Gould was a minor patent in 1977 and in 1987 won the first major victory in his patent lawsuit.

There is much history when it comes to lasers. From the first theoretical work, to the creation of the term, to a lengthy legal battle for rights to ownership. Innovations over the years are extensive and historians still find some contention when trying to categorize who exactly invented the laser as there was many discoveries and achievements which lead to other discoveries, which in time build up enough information for someone to build a laser based on others work. To Buy a Powerful Laser Pointer today, you can look online and make the most of the technology we have access to every day. Call Biglasers.com and ask questions if you have them: 877-256-6513

Price Drop on Two of the Most Popular Handheld Lasers

The laser community will be happy to learn about the price drop for 2 of our most popular high-power lasers. The popularity of the GX Green Laser and the BX Blue Laser Pointer has allowed for a permanent price reduction to start now in 2022. This is great news because...

2022 is just a few short days away and that means a time for reflection on the year we've just had. We saw the pandemic continue, supply chains get slogged, and inflation increase global costs, but it wasn't all bad news this past year! In fact, despite all of those...