Laser technology has a long history of providing not only innovations to day to day life, but also to entertainment and live performances as well. Nowhere is this concept more prevalent than in the world famous DPSS laser and laser pointer light displays developed by Pink Floyd in the ’70s. Ever the consummate artists, producing some of the greatest music the world has ever seen was not enough, Roger Waters, David Gilmour, Syd Barrett, Richard Wright, and Nick Mason, would develop a concept which was never before seen (not unlike their music). What emerged was a completely interactive concert and live performance experience through laser technology timed perfectly with the ebbs and flows of their most popular tracks. 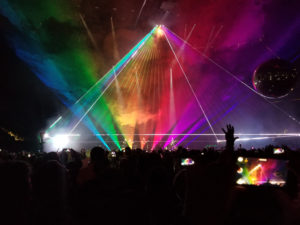 During the 1970’s getting your hands on high power laser tech was not as it is today. The internet didn’t exist, satellite technology was in its infancy, so you couldn’t simply pop online and order a burning laser pointer to your front door in a matter of days. This meant that the entire idea of using lasers for added effect during concerts was revolutionary.  This is something that would be copied time and time again through the ’70’s, ’80’s and beyond to today. Now it seems every major performance has a series of lights and lasers providing visualization. The key difference is laser power and consistency as well as cost of available technology. Today one could feasibly create the same performance Pink Floyd had done in their heyday for a fraction of out of pocket cost, without the entire team to set up and operate the equipment, and receive the lasers via mail in a matter of days. Something which back then was unheard of.

This is one of the largest and most incredible differences from the ’70s until now in terms of laser pointer and lab laser technology. The band’s tech team utilized hundreds of light fixtures and lasers for their first development of the show series, however, when their shows reached a pinnacle in the early 1990’s, they were employing incredibly powerful isotope-splitting copper-vapor laser system. They costed over $120,000 each and were gold plated. Today, you could produce the same visual displays for a large stadium at 1/1000’th of the cost if you knew where to look and make the most of laser light reflection and control. Even a simple hand held laser pointer of 100mW can be seen at night or in fog for over 10 miles, so the options for anyone wanting to really enhance a visual space are seemingly limitless.

The laser system show first made an appearance during The Dark Side of The Moon tour in 1974, and soon became a staple at every live Pink Floyd performance. However, it was not as simple as setting up the lasers and having a technician time the on and off switches. The engineers utilized thousands of reflective lenses and mirrors to stretch the visual strength and versatility of the few laser beams they were able to utilize. A single high power laser beam was a thing of beauty and incredible technical engineering at this time, so to get the most out of each diode they had to develop elaborate lens and reflection schemes around each venue and stadium they would play. This took incredible planning and practice and the engineers would sometimes start set up days before the band members would even arrive on the seen.

Pink Floyd changed the very nature of live performances with their use of laser light technology. Today you can still see the example they set by cover groups who play Floyd music along with the same style (albeit more advanced) laser performances across the globe. We can see the lasting impact in just about every large stadium performance and concert as nearly all major musicians have an entire team dedicated to using lasers, lights, reflectors, and even fire as well to enhance their music and the performance for their fans. It all started with the development of high power lasers, and today the same technology is available in hand held form.

So, if you have interest in High Power Hand Held Laser Pointers, there are a few things you can do to make the most of it. Do some research, ask questions if you have them, and most importantly make sure you know what you’re buying. All lasers are not created equal just as all laser companies are not created equal. For the #1 Trusted Laser Source Since 2005, look no further than USA based BigLasers.com 877-256-6513

Price Drop on Two of the Most Popular Handheld Lasers

The laser community will be happy to learn about the price drop for 2 of our most popular high-power lasers. The popularity of the GX Green Laser and the BX Blue Laser Pointer has allowed for a permanent price reduction to start now in 2022. This is great news because...

2022 is just a few short days away and that means a time for reflection on the year we've just had. We saw the pandemic continue, supply chains get slogged, and inflation increase global costs, but it wasn't all bad news this past year! In fact, despite all of those...