Which Laser Pointers Can Burn?

With the advancements in laser pointer technology over the past ten years, you may be asking yourself, “which laser pointers can burn”? Depending on the color and more importantly the mW or Watt output power, some lasers will meet the burning beam threshold whereas others will fall just short or completely off the mark. Let’s look at some of the key factors to ensure any laser you’re considering meets for high power and heat. 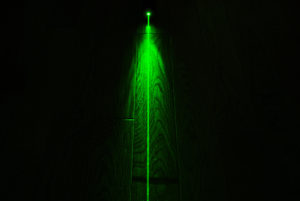 Which Laser Pointers Can Burn

Some users may believe that the color is more important for burning ability, such as green because it’s the brightest laser color to the human eye in the visible light spectrum at the same output power. However, this is a common misconception. The most important factor for a high-power laser is the actual strength of the beam itself, regardless of the actual color. As a rule, a laser that can light a match, pop a balloon, or cut electrical tape, will need to be over 200mW or 300mW, and the higher the power the better. For example, a 3,000mW blue laser pointer will be a fast-acting burning laser tool whereas a 200mW unit will just be able to pop a black balloon. So keep this in mind, the higher the output power the better for this sort of application.

This is an area that is very easy to confuse as well. Popping a balloon with a lower power burning unit, like a 200mW laser pen, you’ll need to keep in mind the color of your target. For instance, if you’re trying to pop a balloon that is white, it will actually reflect much of the beam and heat and direct it away from the balloon’s rubber, making it far more difficult if not impossible to pop at lower output powers. An easy fix for this is of course going with a high class IV laser over 500mW, or simply using a black balloon. You can even use a white balloon and use a black magic marker to draw a circular target which will actually change the way in which the heat and light is absorbed into the balloon’s rubber, making it possible to pop as if it were black altogether. The same applies to a match head, put some black magic marker on it to speed up burning times.

What Laser Pointers Can Burn

Many handheld lasers utilize a fixed focus beam meaning you cannot alter the width or the intensity of the beam diameter. This is fine for burning experiments if your laser is high in power, but utilizing a pointer with a focusable adjustment lens will add much more beam control and allow you to actually increase the intensity by reducing the beam size and creating a great impact on your target. Look for lasers that have a focus adjustment option, where you typically turn left to widen the beam and reduce the heat intensity and turn to the right to reduce the beam diameter and increase the burning ability. This is critical for mW power units on the edge of the burning limit.

4. Extra – Be SURE To Use Safety Goggles

It should go without saying but using a high-power laser, especially with the ability to burn, will require a bit more safety consideration than your everyday laser pen. Most high-quality high-power handheld lasers do come with a pair of safety goggles included, however, if the one you’re considering does not (maybe look elsewhere), or simply add a pair of safety goggles to your order. You cannot use standard UV protective sunglasses (this is another common misconception), as they don’t block the specific wavelength of laser light in the way certified laser safety equipment does. Using laser safety eyewear allows you to look at your target and the beam when, for example, you may be cutting black electrical tape, you can actually track your movement in a straight line and increase the burning speed and reduce the time. This makes it a far more versatile and safe tool to use on a daily basis.

So if you’ve been wondering Which Laser Pointers Can Burn, you should now have a great idea of what to look for. Typically blue lasers at 450nm are the most common and cost-effective in high power ranges of over 1,000mW (1 Watt), so that is a good place to start. For laser pointer expertise and innovation since 2005, look no further than BigLasers.com, the #1 trusted laser source online. 877-256-6513